Dyllan Solis has given Patriot opponents next year a pretty scary thing to contemplate coming into 2019. The 2020 prospect indicates on various social media platforms he has some scores to settle. We watched his junior season highlights and thought he was getting even with some folks last year, the way he was hitting them.

Being honest, KPGFootball and Stewart Williams Furniture Company are kind of partial to football players like Dyllan Solis. Dyllan is a football player’s football player. Dyllan, at 5-7 and 200 pounds is constructed of solid steel. He bench-presses 325 pounds, power-cleans 260 pounds, and squats 470 pounds. That means when he’s deployed at NG, digging him out of the hole is nearly impossible. When he’s deployed at FB and runs the football, leads a play around end, or stays back in protection, getting hit by him is something you’re lucky if you remember (as he’s liable to leave you unconscious) and you’re sure to feel it for a long time thereafter. 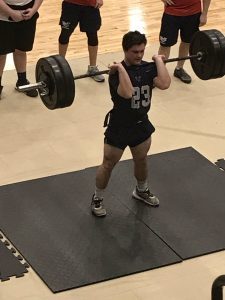 Tryouts
7:30 am
View All Events